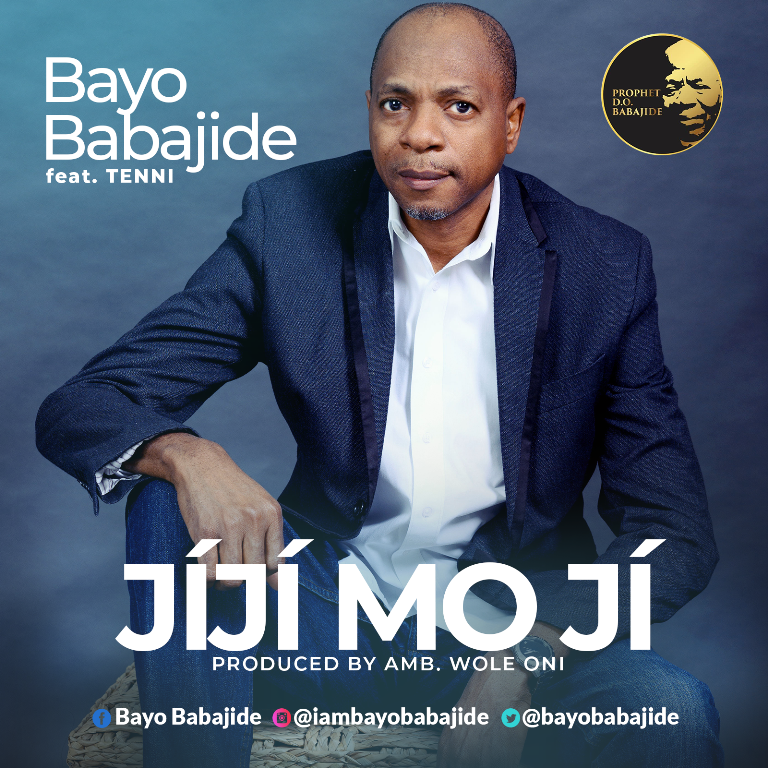 Pastor Bayo Babajide unlocks a breath of fresh air with the release of his new single titled – ‘Jiji Mo Ji’ featuring Tenni; a track from his soon-to-be-released album – Songs of all Times.

The new single – Jiji Mo Ji is a Contemporary folklore with a Jazz acoustic guitar intro and urban choir climax; produced by the legendary and consistent – Ambassador Wole Oni.

Here we are, in the middle of an era that affects the whole world, just when people are about to cast off restraint, Jiji Mo Ji appears at the centre stage of our daily experience to remind us of God’s protection, it is only expected that we give him praise, thanksgiving and gratitude for life.

It is important to deliberately be grateful for every phase of our lives, especially the gift of sleeping and waking up that money cannot buy.

In Pastor Bayo’s words – ”The motivation and aim is to share my father, Prophet D.O. Babajide’s songs with the new generation and relive it in the experience of the earlier generation. Thereby dispense God’s mind to the world, as these songs were all inspired by the Holy Spirit.”

Pastor Bayo Babajide is a seasoned instrumentalist, singer, music teacher and worship leader. He has directed church choirs for many years.

His love for and passion to create, teach and support excellent music/musicality began while he was a kid, who had the great privilege of watching his number one music mentor, his father, compose classic and timeless songs.

His father, Prophet David Olulana Babajide, composed and arranged many songs, divinely inspired and communicated to him by God in the dead of the night. (Prophet Babajide hardly slept throughout the night.)

Sometime in the 1960s, Baba came to the usual general morning devotion of Pastors and Student Evangelists studying under him and said “Let me teach you a song the Holy Spirit taught me through the night”, one of those songs is “Jiji Mo Ji”. Which later became a household song to start the day with every morning. This song later spread to homes and

schools to begin their days and was also adopted by many churches.

He was nicknamed – “The Singing-bird of Jesus,” and widely known for his sweet voice and a rich repertoire of gospel choruses and songs, Prophet Babajide was also a renowned multi-instrumentalist. He was particularly proficient in playing the trumpet, guitar and keyboard.

He was also an outstanding accordionist.

An author of many books, Prophet Babajide published two songbooks- a hymnbook with 85 Hymns (Orin Emi mimo), and a Chorus book with 183 choruses (Orin Idaraya). Most of these songs and choruses remain evergreen as contemporary classics spreading the gospel all over the world.

From the short history above, it is not surprising at all that his son would walk in his stead, particularly, musically.

Pastor Bayo did not stop at the rudimental knowledge of music which he obtained from his father, he graduated with a degree in Music from the University of Nigeria, Nsukka.

He is a Music Consultant to several churches and also teaches several instruments to adults and children of all ages. He ministers in songs and with saxophone at several revivals and concerts. His passion is to create an environment for God’s presence through music.

He is currently the Music Director of the Redeemed Christian Church of God, Victory Temple in Bowie. Under his leadership, the Tribe of Judah has become a well-known choir in the community. In September 2011, they won the “How Sweet the Sound” award for the best small choir.

He has begun an extremely laudable project, to relive some of the evergreen songs composed by his father by putting them together as a whole Album (Songs of All Times).

He has chosen – Jiji Mo Ji as the first single to arouse the appetite of those that have always loved these songs and those that will begin to appreciate them.

He is married and the marriage is blessed with children.