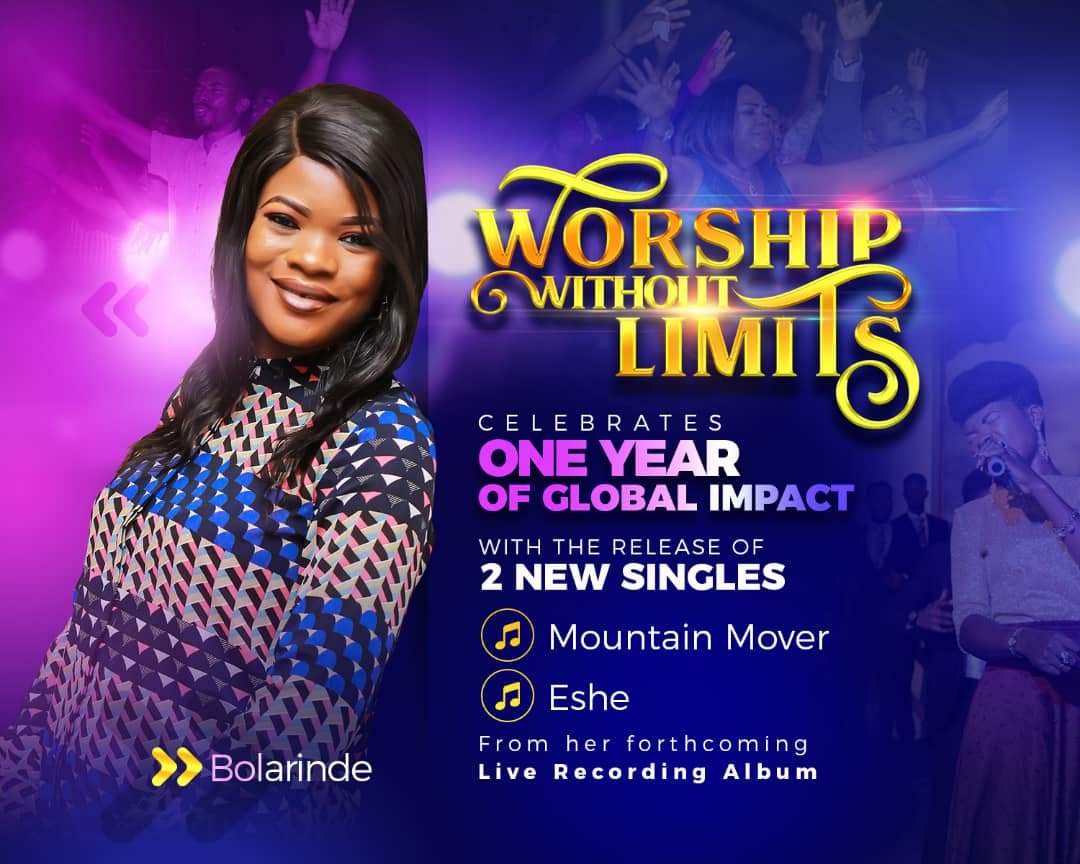 Gospel music minister and visioneer, Worship Without Limits, Bolarinde is set for a double release off her forthcoming 2019 album.
The singles “Eshe” & “Mountain Mover” are 2 singles from the compilation of songs accrued through Worship Without Limits concerts. A few of the songs from the concerts have been compiled over the period of time to be delivered as an album in January 2019, Bolarinde gives a glimpse of the body of work with “Eshe” & “Mountain Mover,”  as “Worship Without Limits” celebrates one year of global impact.
“God has given us so many songs which we have compiled a few in an album coming to you in January 2019. We want you to enjoy these two songs titled “Mountain Mover” and “Eshe,” these were songs birth at points when we weren’t sure the next step, when it looked like everything was caving in and the vision being questioned by some persons who didn’t understand us, but right in midst of it all God gave us these songs and that changed everything.”
Worship Without Limits concert aims to take the message of the Gospel around the nations of the earth, fulfilling the mandate of our Lord Jesus to go and make disciples of every nation. Although the vision was birthed about 15 years ago when Bolarinde was on campus, Worship Without Limits went into full activation in October 2017, reaching several lives in several continents through the live concerts streamed across different global platforms.
The maiden edition of Worship Without Limits held October 15th, 2017, at the Banquet Events centre, Lagos, Nigeria, with over 430 people in attendance. It featured anointed Gospel music ministers Ayo Vincent, Eniola Adisa, Adenike Boluwade, Elzaccai and Pastor Obed. The 2nd major program held on the 1st of May, 2018 with over 400 people in attendance and also featured anointed Gospel music ministers Sammie McCauley, Adetayo Adeniyan, Timax and Hezekiah Sax.
Christ Embassy Church, Ikotun, hosted another major edition of the program on the 14th of May, 2018, and it had over 500 people in attendance. Several testimonies have emanated as a reason of the concerts, but it is only the tip of the iceberg. Worship Without Limits is still on the move and several programs are still lined up.
Other released work by Bolarinde include “For Your Praise” & “You Amaze Me.”
Connect:
Instagram: @bolarinde_worshipwithoutlimits
Facebook: Bolarinde Omorejie
Twitter: @bolarindesings