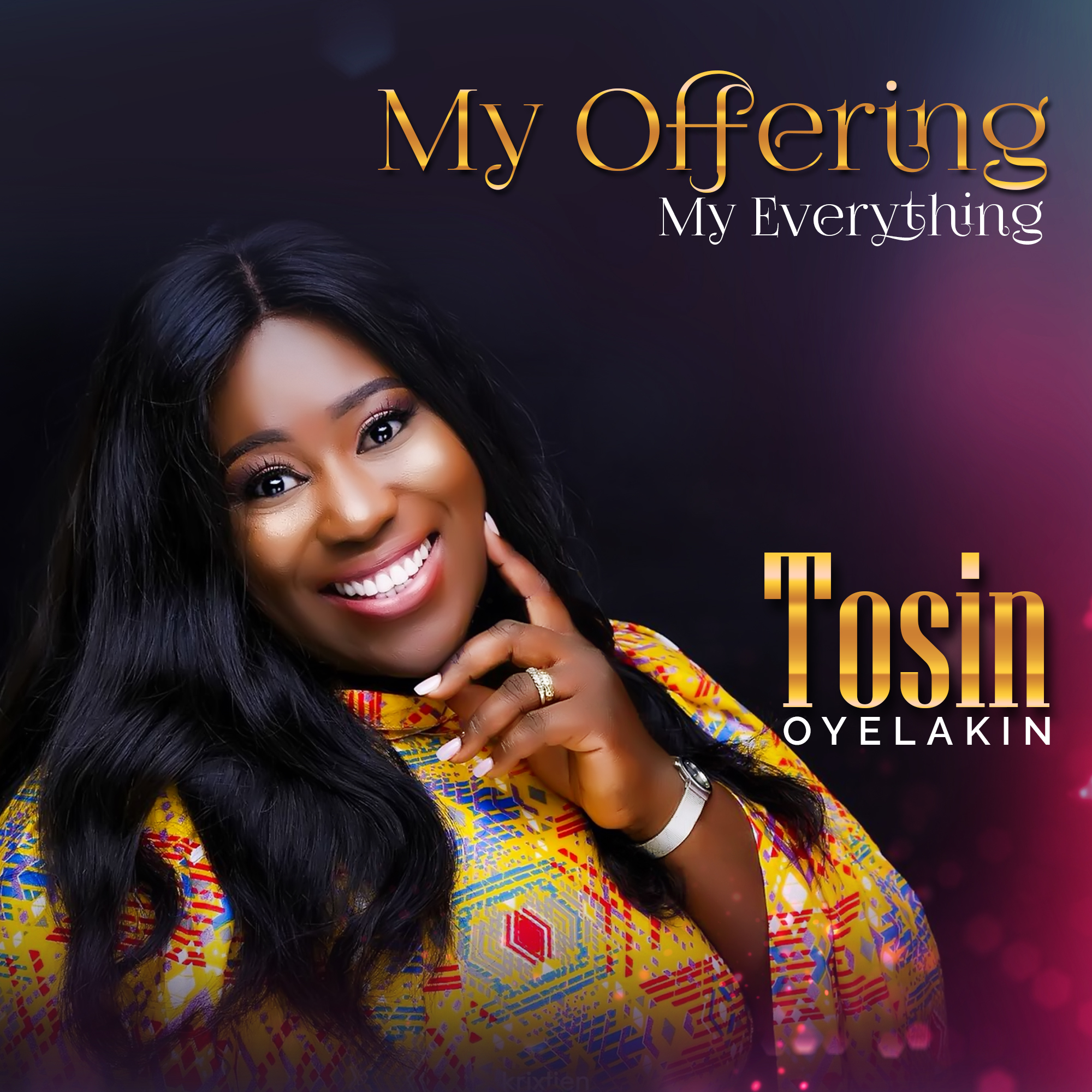 Tosin Oyelakin‘s new album “My Offering, My Everything“ is now available in Nigeria. The album which is still getting rave reviews features anointed music ministers such as Pat Uwaje-King, Onos Ariyo and Manus Akpanke with production from Phat E, Niyi P., Manus and Ibe Giankiller.
According to her: “”My Offering, My Everything” is an album with songs solidly based on the scriptures. The songs themselves are in an eclectic mix of genres ranging from upbeat rock praise songs, to worshipful, inspirational, dance, RnB, and Afro beat songs. There is definitely something in there for everyone regardless of their taste in music.”
The album contains Tosin’s previously released hit singles like “Amazing Grace”, “Thankful the Remix”, “Love Is”, “Thankful” etc.
You can purchase the album in Nigeria from any of the following Christian stores:
1. Laterna Ventures,
13, Oko-Awo Close,
Off Adetokunbo Ademola Street,
Victoria Island,
Lagos.
2. Bible Wonderland,
Alaka Estate, Beside National Stadium,
Surulere,
Lagos.
TRACKLIST
1. My Everything
2. Praise Him
3. Glory And Honour Ft. Onos Ariyo, Anuolu Oyedele
4. Amazing Grace
5. Thank You Father Ft. Pat Uwaje-King
6. My Solid Rock
7. His Joy Comes
8. My Heart’s Rhythm
9. Thankful
10. You Are God
11. Love Is Ft. Manus Akpanke
12. Great And Mighty God
13. Praise Him (Giantkiller Rmx)
14. Amazing Grace (Giantkiller Rmx)
15. Thankful (The Remix)
You can also purchase from digital stores via links below:
iTunes: http://itunes.apple.com/album/id1388803969?ls=1&app=itunes

Google Play: https://play.google.com/…/Tosin_Oyelakin_My_Offering_My_Eve…
Amazon: https://www.amazon.co.uk/My-Offering-Ever…/…/ref=mp_s_a_1_2…
Tosin Oyelakin’s website: tosinoyelakin.com/store
ABOUT TOSIN OYELAKIN
Tosin is a Nigerian-British Gospel Singer/Songwriter who has been singing in church since about the age seven, first in her church choir in her country of birth Nigeria and today in the UK where she now lives.
In February 2016 Tosin released her debut 3 track EP, ‘You’re Precious’, which is a combination of contemporary RnB sounds and deeply inspirational words that seek to bring, comfort and healing to all those who are in need of it.
Tosin has just launched, in a live concert on 16th of June, her 15 track album titled “My Offering, My Everything” which was officially released for download on all major digital stores on the 1st July 2018.
The album contains Tosin’s previously released hit singles like Amazing Grace, Thankful the Remix, Love Is, Thankful, as well as some new songs.
Tosin is a physiotherapist by profession and is married to her wonderful husband – Akinsola Oyelakin. Together, they are blessed with 2 beautiful children.
CONNECT WITH TOSIN OYELAKIN
Facebook | Instagram: Tosin Oyelakin Official
Twitter: @TosinOyelakin
Website: www.tosinoyelakin.com