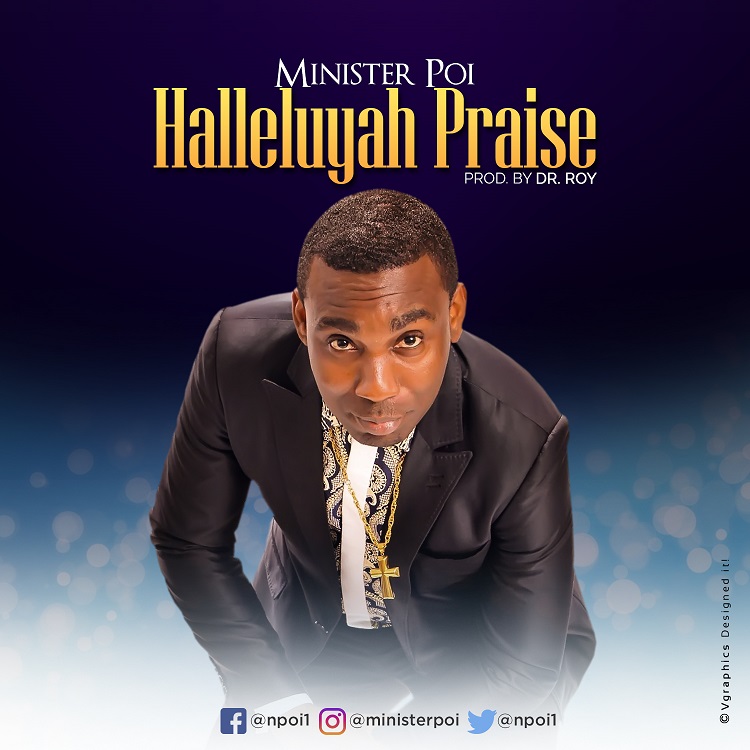 Singer, songwriter, keyboardist and music producer, Minister Poi teams up with star producer, Dr Roy to churn out this mid tempo, praise tune titled “Hallelujah Praise”.
This is Minister Poi’s second single this year following the release of “God of Shiloh” in March.
Download, listen and kindly share.
DOWNLOAD
LYRICS
Written and composed by Minister Poi
Verse 1:
Heaven and earth adore you, angels bow before you
The Twenty four elders worship you
And we give you the highest praise
Chorus:
Ha… lle… Lu… Luyah
Ha… lle… Lu… Luyah
Verse 2:
At the mention of your name every kneel must bow
Every tongue must confess Jesus Christ is lord
We give you the highest praise
For everything that you do
For everything that you are
Jesus Lord you reign forever
Repeat chorus:
Rap:
Yeah, I am here cause Lord you are able
You are able and yes you are faithful
I will exalt you my God you’re the king
I will praise your name forever
Everyday I will praise you exalt you
Great is the Lord the most high
You are worthy of my praise the greatness
Your greatness they make me they wonder
No wonder you dey strike like thunder
They will speak of your glorious splendor
Of your majesty i will meditate
On the wonders of your works i will speak
From the ends, the ends of the earth
The depth, the depth of the sea
The hight, the hight of the heavens
Your name, your name be praised
Repeat Chorus
ABOUT MINISTER POI
Minister Poi a.k.a N.Poi 1, is a Nigerian born, United States based Gospel singer-songwriter, keyboardist, event manager, and record producer.
In 1995, Minister Poi got born again and baptized in Foundation Faith Church after attending and graduating from the foundation class. Poi was the founder of the ‘Heroes’ singing group in the 20th century and currently the leader of God’s Praise Family in the United States.
Poi also became one of the most popular praise & worship leaders in the field. Mr. Poi who was ordained a minister in Chrysolyte foundation ministries in 2008, began singing with church choirs from the age of 16. He played Keyboard and sang with the Faith Life Choir, RCCG Green pastures Parish choir. Served as a music director in Effectual Word Christian Center, Chrysolyte Foundation ministry, Saviour’s Intl Ministry and Winners Chapel int’l Houston Texas United States. Showcasing his superb arranging, production, and songwriting skill as well as his soaring vocals. Poi’s concurrent solo career began in 2014 with his “TAKE OVER” album , and he released additional Single titled Out of Ebola the same year, gradually embracing an in-concert feel even on his studio recordings… He released his first musical video titled “Messiah” in May 2016.
CONNECT WITH MINISTER POI
Instagram: @MinisterPoi
Facebook | Twitter: @NPoi1