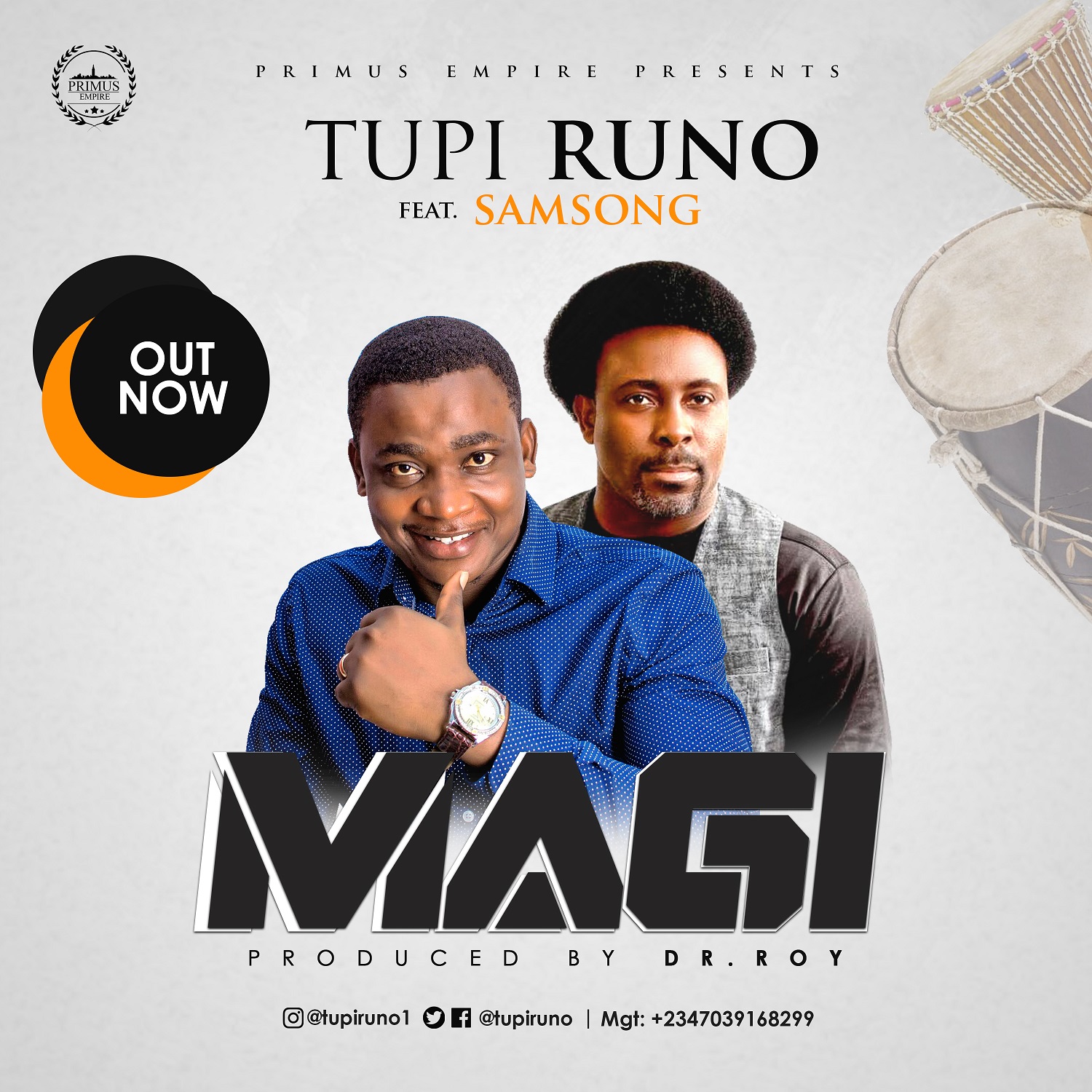 Music minister, Tupi Runo releases brand new single titled “Magi.”
According to him: “Magi” was coined from the word ‘magnify’. The song encourages us to magnify Jesus in all we do. Let’s not take glory to ourselves but acknowledge God as the source of our breakthrough and the keeper of our lives.
“I’m very delighted and honoured to have my big brother, Samsong join me on this song. Please listen to the song. It will bless you.”
DOWNLOAD
LYRICS
Magi Tupi Runo Ft. Samsong
E get one lady her name na magi
She came to the church to give magi [2x ]
Which kind magi be that e ooo
White magi ? No
Yellow magi ? No
Brown magi ? No
Ok na which magi [2x]
Chorus
Let God be mangnified e ooo
Magi magnified e oooo [4×]
You are the almighty God
Agbadagbururu (miracle worker) na your name o
When u say yes is yes your no na your no
No one dey like uooo
Magnify the lord with me let’s exhort his name together
For the things e dey do for me and you dey sweet our body
Eagles let him hear u say
Na you be the ogbonge ( stand still) papa
Na u be the king of kings
Na u be the Lord of lords
Everlasting Father ancient of days nobody be like you
Let God be magnified eoo
Magi magnified eooo( 4×)
I stand amaze at the things you do
You never change and your love is true
That is why my heart always pants for you
Bcos you have done what no one else would do
Everybody everybody come and join me dance
Magnify the lord with me bcos he has done me well
The goodness of the lord dey make me want to testify
EzeBube(GreatKing) bianarekele
Eagles let him hear you
Eledumare Abasibomkenyo you are the most high God
Ogwokogwoko1 Agunechemba 1 osinawataburogharanya
Somebody anybody magnify…..
Let God be mangified eooo
Magi maginfied e ooo (4×)
Adlip
For all the things he has done
For all, the battles won
He changed my life
Join me say we kobiruo (3×)
Come and magnify, magnify the lord with me
He is done marvelous things (2x)
Wegbehako ghene me Let’s Dance for our God.
ABOUT TUPI RUNO
Paul Ogheneruno Shishe was born May 7th 1982 to family of late Mr Lucky Shishe and Mrs Rebecca Shishe in Numa clinic, Warri.
He had his primary education in Aileru primary school, Warri and College of commerce and standard international school, Warri. He is a graduate of Chemical engineering from the university of Portharcourt, Nigeria. He has worked as field service engineer in some companies in Nigeria and in diaspora.
He started singing at age 16 with his team De ordained for many years. He went solo in 2010 with a hit single ‘Papa God’. He has had the opportunity to minister on the same stage with the likes of Samsong, Eben, Joe Praise and Frank Edwards.
The gospel artiste whose main genre is afro highlife beats has 2 albums in his kitty. The first album titled ‘Na You I Know’ was launched in Portharcourt in 2014 and this second album was launched in Kuwait titled “My Testimony” now out online and in local stores. This new album has hit song like ‘Favour’ with a video to it’s credit.
He became born again 1998 at a Scripture Union meeting in, Warri. He has a music group called D Eagles. They take worship to the streets and win souls for God. He is the founder and leader of the Extreme Worshippers Outreach (TEWO) and is a member of the Redeemed Christian Church of God, Wisdom Chapel, Elimgbu where he serves as assistant youth pastor.
Tupi is happily married to Oke Angela and they are blessed with 3 kids; 2 boys and a girl.
CONNECT WITH TUPI RUNO ON SOCIAL MEDIA
Twitter: @TupiRuno1
Facebook | Instagram: Tupi Runo Greatly to be Praised ~ Gracie Adajie