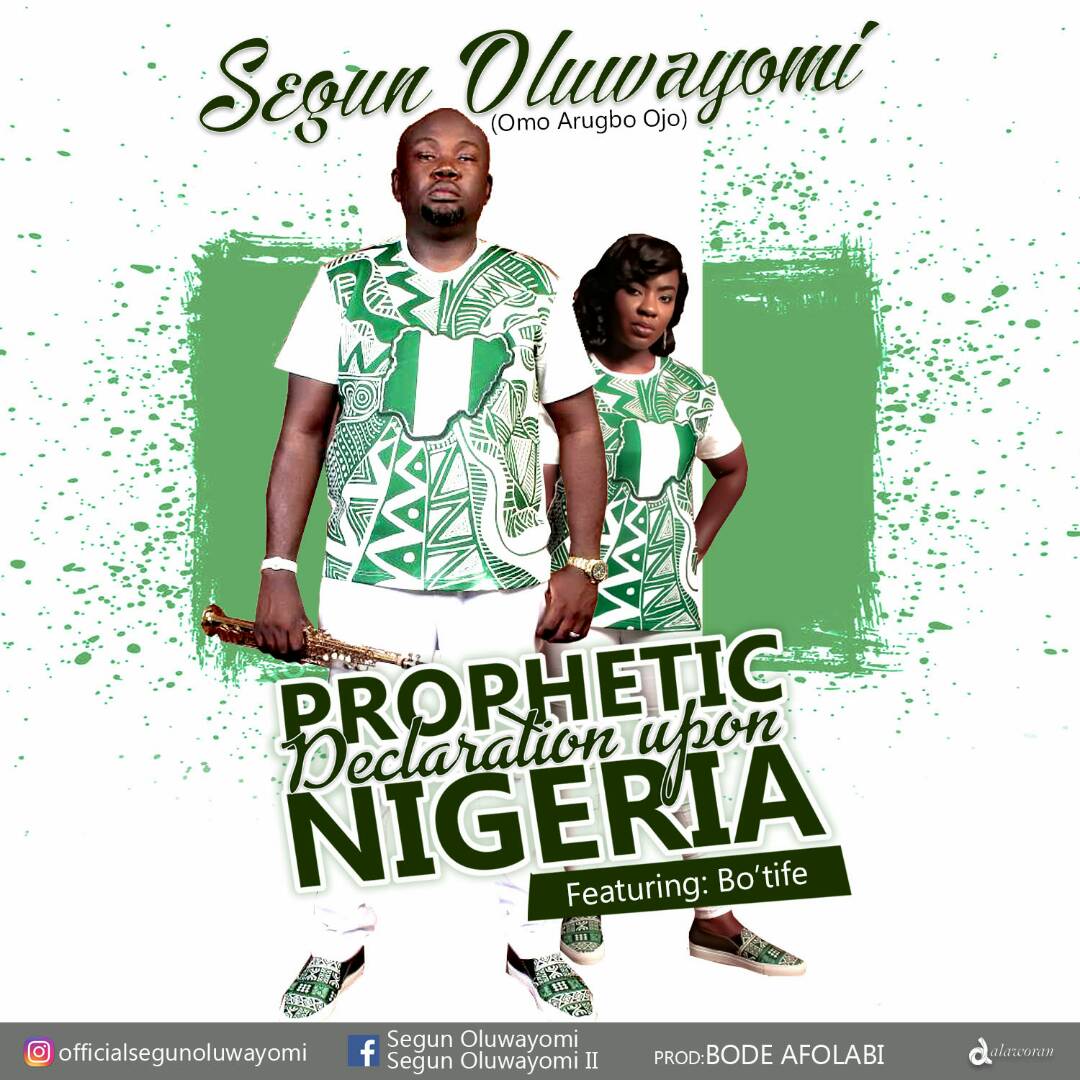 Segun Oluwayomi aka Omo Arugbo Ojo, the Arugbo Ojo crooner and a multiple award winning gospel saxophonist in Nigeria, who is also the CEO of Enoch Media Nigeria Limited is out with a single he has titled ‘Prophetic Declaration Upon Nigeria‘ to celebrate her 57th Independence featuring his beautiful wife Boluwatife.
Segun Oluwayomi is a dynamic vessel that God is using as a tool in His hands in this generation. He’s a music minister in CLAM (Christ Livingspring Apostolic Ministry) under the leadership of Pastor Wole Oladiyun.
He stands out of the crowd through his unique way of worshipping God with the instrument God has placed in his hands, the saxophone. Segun worships God in the traditional way which he also blends with contemporary. He goes back to his heritage, and with his language rich in words, he entertains his God. He believes the best way to connect to your God is by speaking your own dialect.
Segun Oluwayomi has three outstanding albums to his credit, the first one is titled Arugbo Ojo (series I) which he released in the year 2000 and the second one is Aseda Oga Ogo (Arugbo Ojo series II) which was released in the year 2005 and the third one is New Glory (Arugbo Ojo series III) which was released in 2012. (View the video attached)
He has taken his dynamic gift of playing the saxophone out of the shores of the country. He has toured round countries all around Europe, the United Kingdom and the United States of America and some parts of Eastern Africa.
Segun Oluwayomi is the face of traditional Christian music, bearing his mark in African jazz. Galatian 6:17.
Segun Oluwayomi at the instance of the current situation of the country saw a need for a cry out to God as Nigeria celebrates her 57th Independence anniversary for an urgent divine intervention.
Few months ago, Segun Oluwayomi also started a Facebook live video of praise and worship to God on the 1st of every month which he believes is what God demands from us at this time and the only thing that can move the finger of God to intervene.
The single ‘Prophetic Declaration Upon Nigeria‘ produced by Bode Afolabi is an exquisite sound production, a healthy & beautiful blend of Western & African idioms. It is an excellent piece, which is rich in content, melodically catchy, lyrically engaging, & stylistically welI blended. It represents the ‘Specific Word’ Nigeria needs at this crucial season we presently are.
The opening choral construct wasn’t quite suggestive of the full content, an attribute of any good artistic work. Distinctiveness in terms of instrumentation. One curious & intriguing aspect on a theological front is the solo & choral response ending… ‘Eyin agbagba orun, e dide’. Even though the scripture affirms that there are different beings of different orders in heaven, each saddled with its assignment, we can equally contend that it’s the intervention of the host of heaven that is being sought, since God is described as the LORD of Host, Mighty in battle & the terrible one.
It is with great pleasure this single ‘Prophetic Declaration upon Nigeria’, is hereby released for the listening pleasure of all concerned patriotic Nigerians, and more importantly, for their awakening. The time to cry for our beloved nation’s deliverance is NOW.
DOWNLOAD “PROPHETIC DECLARATION UPON NIGERIA”
Watch Segun Oluwayomi’s latest music video “Praise of the prophets” below: