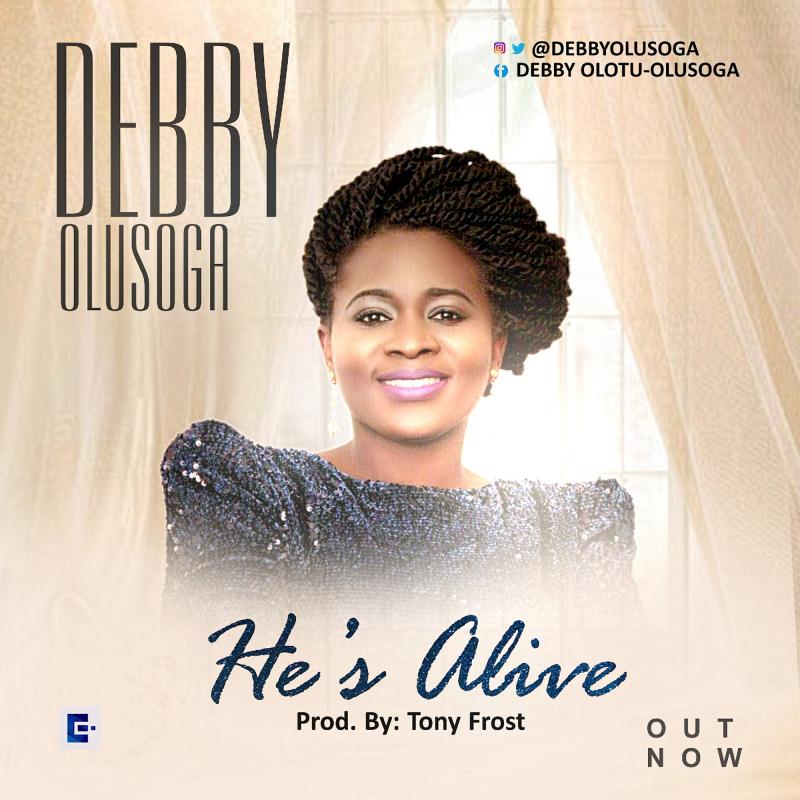 Debby’s latest single ‘He’s Alive’ produced by Tony Frost is a song released unto her by the Holy Spirit while communing with God.
It is a groovy song released to celebrate the life and death of Jesus Christ for the sacrifice He paid on the cross and it also reminds us of the glory that awaits us at the end of our race here on earth as believers.
“There would have been no Christianity without the resurrection of Jesus Christ. His resurrection gave us life, hope, joy and freedom. If you have never at any point met with the Lord or believe His son Jesus Christ, do not delay. Heaven is real and Jesus is real! I pray this song blesses your heart and cause you to remember and fully understand the love Jesus Christ has for you.” – Debby Olusoga

DOWNLOAD
LYRICS
HE’S ALIVE by Debby Olusoga
Chorus:
He’s alive
He’s alive
He died to safe us
He’s alive. 2ce
Verse 1:
His name is Jesus
The son of God
The anointed one sent by the holy one of Israel
The son of God
Delivered into the hands of men
Yeah He died and rose again and
Alive forevermore
Verse 2:
Most blessed one
The king of kings
You overcome
You have won the victory
The son of God came to save us from sins
Yeah!
He’s coming back for me and
He’ll reign forevermore
Bridge:
Death could not hold him
He has conquered the grave
Because He lives am alive
Because He lives I can live
Because He lives am alive.
He’s alive
He’s alive
He died to safe us
He’s alive. 2ce
~ Written and arranged by Debby Olusoga
Download Debby’s debut single “Mighty God”
DOWNLOAD ‘MIGHTY GOD’
ABOUT DEBBY OLUSOGA
Deborah Olusoga, stage name “Debby” is a UK based multi-talented worshipper, an anointed songwriter and motivational writer who started singing in a Roman Catholic Church in Nigeria at a very tender age before she joined The Redeemed Christian Church of God, a Pentecostal church in 1998 where she continued to sing as a Worship Leader till date.
Her love for music grew out of several unanswered questions she experienced while growing up and she began to develop her thoughts into writing, many of which became news articles, songs and book. She was appointed at the Redeemed Christian Fellowship (RCF) as the Choir Coordinator while in higher Institution where she was fondly called “CC Love” which is a combination of her title and one of her songs. She was a member of two different gospel bands with albums. She loves to play drums. She organised her first Youth Musical Concert in 2006 and has ministered at various churches and events.
Debby’s aim is to reach the heart of every youth, every believer and non-believers with the love and liberty in Jesus Christ.
She released her debut single titled ‘Mighty God’ which was produced by Multi-award winning, Evans Ogboi in December 2016. ‘Mighty God’ tells of her divine transformation; how God healed her brokenness and set her free. ‘Mighty God also encourages everyone that God is mighty and will fulfil His promises.
Debby obtained Bachelor of Science combined honours degree in Public Health with Health Services Management and she is a Healthcare Manager. She is into other Christian programmes such as Soul Care and Ministering to People in Pain.
CONNECT WITH DEBBY OLUSOGA
Twitter | Instagram: @DebbyOlusoga
Facebook: Debby Olotu-Olusoga