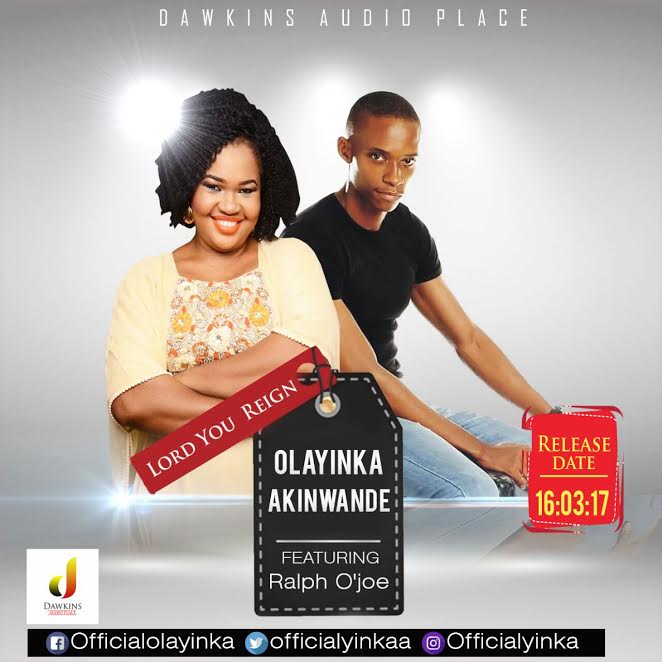 Olayinka celebrates her birthday with the release of a new single “Lord You Reign” while featuring 2016 TheVoiceNigeria contestant, Ralph O’joe.
The music sensation release this beautifully produced, mixed and mastered song in appreciate to God for all She has been through, the miracles, the favour, and also the strength to keep working in the vineyard.
“It is magical have one of the best voice I have heard in Nigeria to feature on the song. Ralph O’joe is amazing asides the fact that he is my friend, i respect him so much and I am really blessed to feature him” – Olayinka.
‘Lord You Reign’ is produced, mixed and mastered by music maestro Hosannah Akinwande (Dre production) for Dawkins Audio place.
ABOUT OLAYINKA
Olayinka is a gospel singer/songwriter, praise leader and a minister, the dynamic gospel Singer/Songwriter drops yet another power packed praise song titled ‘My Praise’ after the release of her first worship single ‘I Stand In Awe’. Popularly known for her strong drive and energy while ministering has been leading praise and worship for over a decade and half.
She was musically trained and tutored by music guru Dr Kunle Pinmiloye (Ksticks), as she is now the choir director at the The Conquerors Assembly, Lagos; and she is Married to Hosannah Akinwande. She studied History & International Studies at the renowned Lagos State University, Ojo.
The Praise leader, who believes in writing songs from experiences and as inspired by the Holy Spirit, hails from a family of 3 where she is the last child.
DOWNLOAD:  http://www.amenradio.net/download/lord-you-reign-olayinka-ralph-ojoe-untagged/?wpdmdl=23604 )