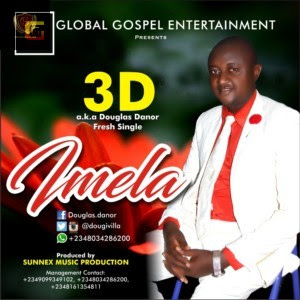 Contemporary gospel singer and multi instrumentalist, “3D“; a.k.a Douglas Danor has just released a brand new single ‘Imela‘ (Thank You). The Cross-River State born artiste is a sensational and inspirational gospel icon that has been in the industry for quite a while.
His new single ‘Imela’ which means ‘Thank You’ is a song of gratitude, thanksgiving and appreciation, to God in recognition of His wonderful works which He has done for him and doing for His (God’s) people.
The song projects the wonderful providence and protective powers and prowess of God as well as the miracles He did to raise His children from the miry clay and setting them on a rock to stay; bringing them from the pit to the palace.
As we march on to and through the glorious new year, 2017, it will be a super fantastic attitude to express our gratitude to God for his marvelous work which He has already done in years past as a prelude to experiencing that which He has in stock for each and every one of us in the new year and years ahead.
With this single, “3D” points us into the direction of acknowledging the wonders of God in our lives so as to move us to always say ‘Imela’ (Thank You) as a lifestyle.
The song production is reflective of his knowledge on musical instruments; this coupled with the message the song carries, which we must not loose focus of makes this song of gratitude an everyday delight to listen to.
kindly hit the download link now to enjoy this inspired and inspirational master piece!
DOWNLOAD
About Douglas Danor’ (3D)
3D, a.k.a Douglas Danor is an indigene of Boki LGA in Cross-river state. He started music in the year 1991 when he joined his mini church choir at Assemblies of God church. This was where he learnt the rudiments of music and horned his skills in instrumentation. He plays the drums, Guitar(bass) and Keyboard. Before heading into professional singing, he had either been a leader or a member of leadership in a number of Choirs at Winners’ Chapel (Living Faith Church) between 2007 and 2013. From 2013 till date, he remains one of the members of the Music Team at Winners’ Chapel (LFC), Head quarters, Ota, Africa; which is the Largest Choir found anywhere on earth today.
His music inspiration and life, has been tremendously affected by the works of and/or words from: R. Kelly, Panam Percy Paul, Pst. Chris Oyakilome, Sammie Okposo, Kirk Franklyn, Frank Edwards and Bishop David O. Oyedpo – his Spiritual father and life coach, whom he sits under tutelage from, week after week.
To God’s glory, he’s happily married to Mrs Joy Danor (nee Udoka) and they are blessed with four kids, 2 boys and 2 girls.
CONNECT
Twitter/Instagram: @dougivilla
Management: +2348161354811
+2348034264200