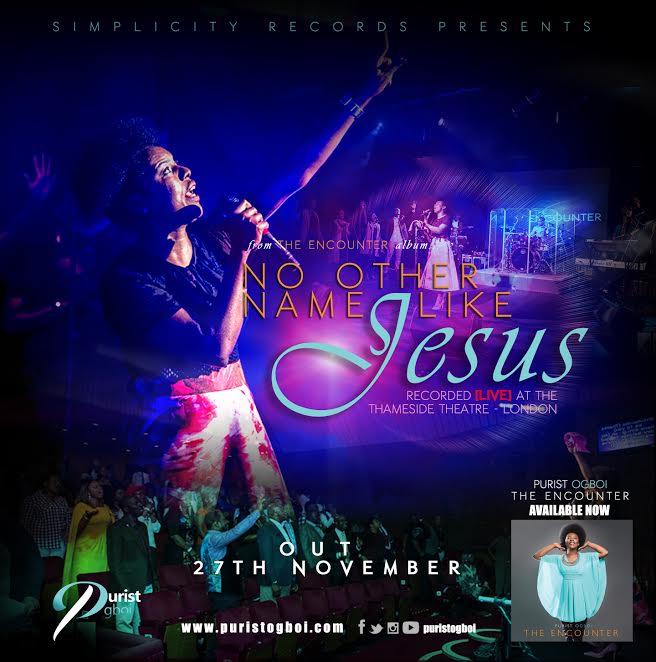 “NO OTHER NAME LIKE JESUS” is a song that declares the power and authority in the name Jesus. It’s the sweetest name on earth, the song that the angels sing, it’s the name that is higher than any other name… Demons tremble at the mention of that name. It’s the only name through which men can be saved. There is truly no other name like Jesus.
“NO OTHER NAME LIKE JESUS” which is the lead single from Purist Ogboi’s “The Encounter” album, premieres on the 27th of November 2016. The song was recorded LIVE at the Thameside Theatre, London United Kingdom. Watch this space!
Music produced by music maestro, Evans Ogboi.
Written by Purist Ogboi.
Video by Iyke Eche of HS IDEAS.
CONNECT WITH PURIST OGBOI
FB: Purist Ogboi
Twitter: @Purist_Ogboi
Instagram: Purist_Ogboi
Website: www.puristogboi.com
ABOUT PURIST OGBOI
Purist is a gifted vocalist, anointed psalmist, praise/worship leader and a very versatile Gospel recording artist. The words that best describe Purist Ogboi are “strikingly different”.
Purist has a very unique style; a fusion of contemporary rock, hip hop, neo-soul and ballad. She is a breath of fresh air in the Gospel music scene with her strong dynamic vocals and endearing quirkiness.
The sincerity in Purist’s voice connects with the heart of the listener in a deep, stirring way, making her music impactful and unforgettable. She is a graduate of BIMM “Tech Music Schools London” where she studied Vocals and Music Performance.
She is happily married to the amazing, multi-award winning gospel music producer, Evans Ogboi who gives soothing interpretation to her music and they both reside in the United Kingdom.