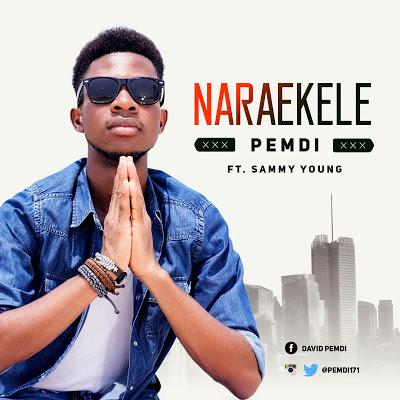 Today, we premier this brand new song from a promising gospel artiste known as Pemdi.
Indeed, Nigeria is blessed as yet another young voice joins the ranks of gospel music ministers like Frank Edwards, Chris Shalom, etc and make himself available to continue singing to the glory of God now and when his predecessors leave the scene for younger voices.
All the way from Dubai, with this brand new song titled Naraekele, Pemdi sets the tone for a lifetime of music ministry with this first officially released single.
The track was produced by Sammy Young and also features the vocals of the said producer. Together, they raise some praise to the glory of God. Go ahead, download below and enjoy as you join them on a praise break with this one
DOWNLOAD
ABOUT PEMDI
Real name David Ugochukwu Richard, Pemdi’s music journey started while he was a choir member of the Goldengate Bible Church, Gowon Estate, Ebgeda Lagos State. Currently, he is an active member of the Redeemed Christian Church of God, Grace Assembly Parish (GAP) in Internet City Dubai – United Arab Emirates.
He launched into professional singing in 2015 and have had live ministrations in the UAE where he is currently based and studying.
He said;
“Narekele is my first official single and is a song that was inspired by the Holy Spirit . It features Samyoung alia Babaonilu who is also my producer and an award-winning producer with known hit songs like Morire and a lot of others. This is a thanksgiving song, acknowledging God for his awesomeness and appreciating his great act.”
CONNECT
Twitter: @pemdi171

Music: Rising Of The Sun (Sovereign Over All) ~ 'Delani [@_daelani]